I’ve played Destiny a lot. As of writing I must’ve played about 30+ hours (~8 hours a day for the first week?). With that many hours put into the game I’ve run into some aspects that are pretty awesome and others that are really terrible.

I can’t say anything about the feel of the game that Brendan Keogh hasn’t said already. I agree 100%. What I want to focus on is the progression of the game; starting a character and getting into the endgame content. 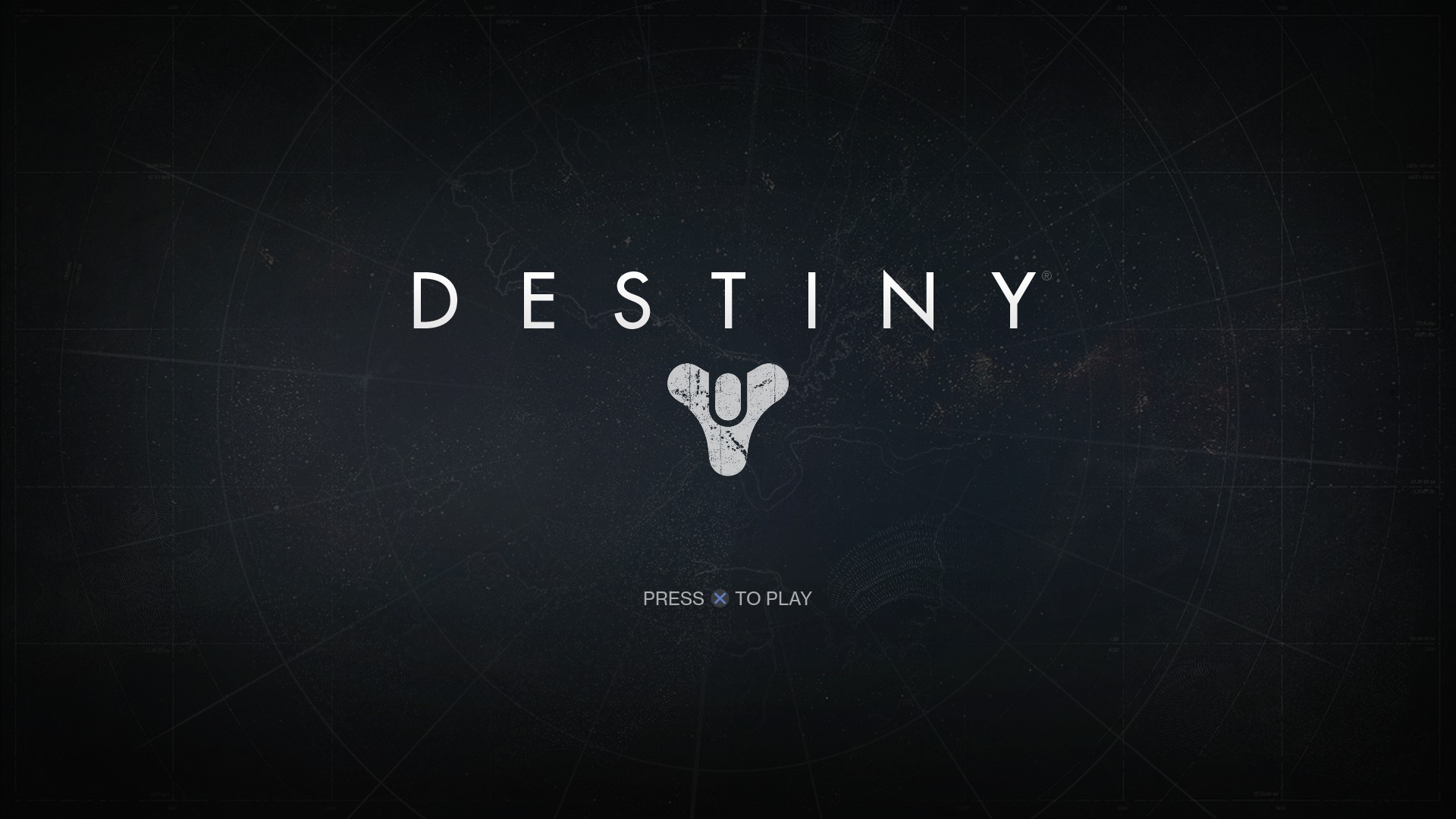 Press X to begin the grind

You start at level 1 and have missions that revolve around a story. As you complete these missions you usually gain enough experience to get to the next level, sometimes you gain two levels. With each level up comes a new ability for your class. If you have any rare or uncommon items they might level up too. A player is almost always getting something new with an immediate reward.

However, getting to the maximum experience level is fast; level one to twenty in about two days. Once you reach the maximum level you now have the ability to buy or find items with an extra ‘light’ stat on them that increases your ‘light level’ making it possible to raise your character’s level above twenty. Equip enough ‘light’ and BAM! now you are level twenty-one, etc.

It is here that the game switches from mission based gameplay to strike based gameplay. Since the player can only get the rewards for finishing a mission once, there is no incentive to replay any of them.

Strike missions (the missions that require online play, have matchmaking, and are generally more difficult than regular story missions) allow players to keep getting items after completing multiple times and since the player is at the maximum experience level, strike missions can be played on a tougher difficulty allowing for better equipment to be found. Mind you that most players have already played through all of the strike missions at least once during the main course of the game.

Cool, I now can replay missions with really awesome boss fights and get better equipment (hopefully something with ‘light’ so I can keep increasing my level). But wait! You can’t just select your favorite of the strike missions to play on this harder difficulty. The only way to actually play on the ‘heroic’ difficulty is to use the ‘Strike Playlists’ the game provides. 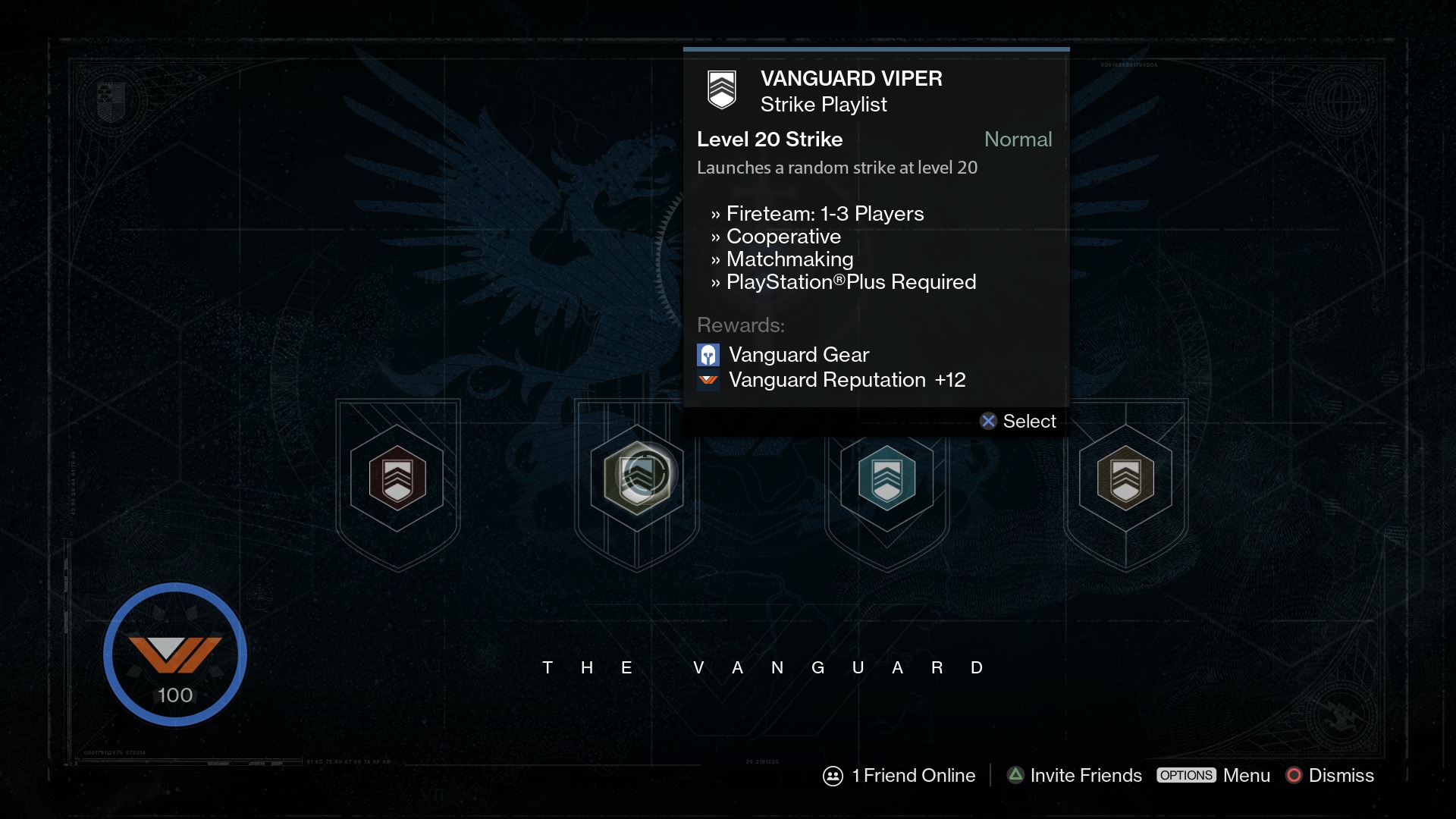 4 strike playlists ranging from level 18 to 24

The worst part is that the strike playlists are random. The game decides which strike mission you play.

Good luck not getting the same strike multiple times in a row (About 90% of the total strikes I’ve played are the same mission, The Nexus)! You have a bounty (side mission to earn a some extra experience and reputation) which requires you to defeat a certain boss on heroic difficulty? HAH! Good luck defeating the random chance monster and getting the strike mission you need to complete the bounty…

Why can’t a player choose the strike mission to play and the difficulty? Barring any matchmaking or server requirements, it seems to me that the only gameplay reason to prevent this functionality is to prevent players from playing the ‘easiest’ strike again and again, but if the random playlist already does that then what’s the harm in allowing the player to set the difficulty manually?

I’ve played you too many times…

Anyway, now we get into the reason why a player chooses to play the random strike missions at all: the equipment upgrades.

These playlists offer rewards in the form of reputation for a faction (which allow you to purchase legendary gear if you have enough reputation and currency) and currency for that faction (up to a total of one hundred per week, any currency gained after the limit is lost).

This is all fine. Most games that offer faction reputation and special currency handle this in the same way. Plus, if you choose a tougher difficulty the player will be rewarded with more reputation and currency than if playing on an easier difficulty. However, where Destiny really differs is how the equipment is rewarded.

Most games that have dungeons with named bosses have those bosses drop a predefined set of items; Some bosses will drop only one piece of a set of legendary equipment, etc. This means that a player will have to get lucky and have the boss drop their piece of equipment. If the piece doesn’t drop, then the player can just replay the mission and try again, but in the end the player knows which piece is going to drop and from which boss. The reward by beating the boss is the chance to get a piece of equipment the player knows is going to drop eventually. This makes doing the same dungeon over and over again digestible. 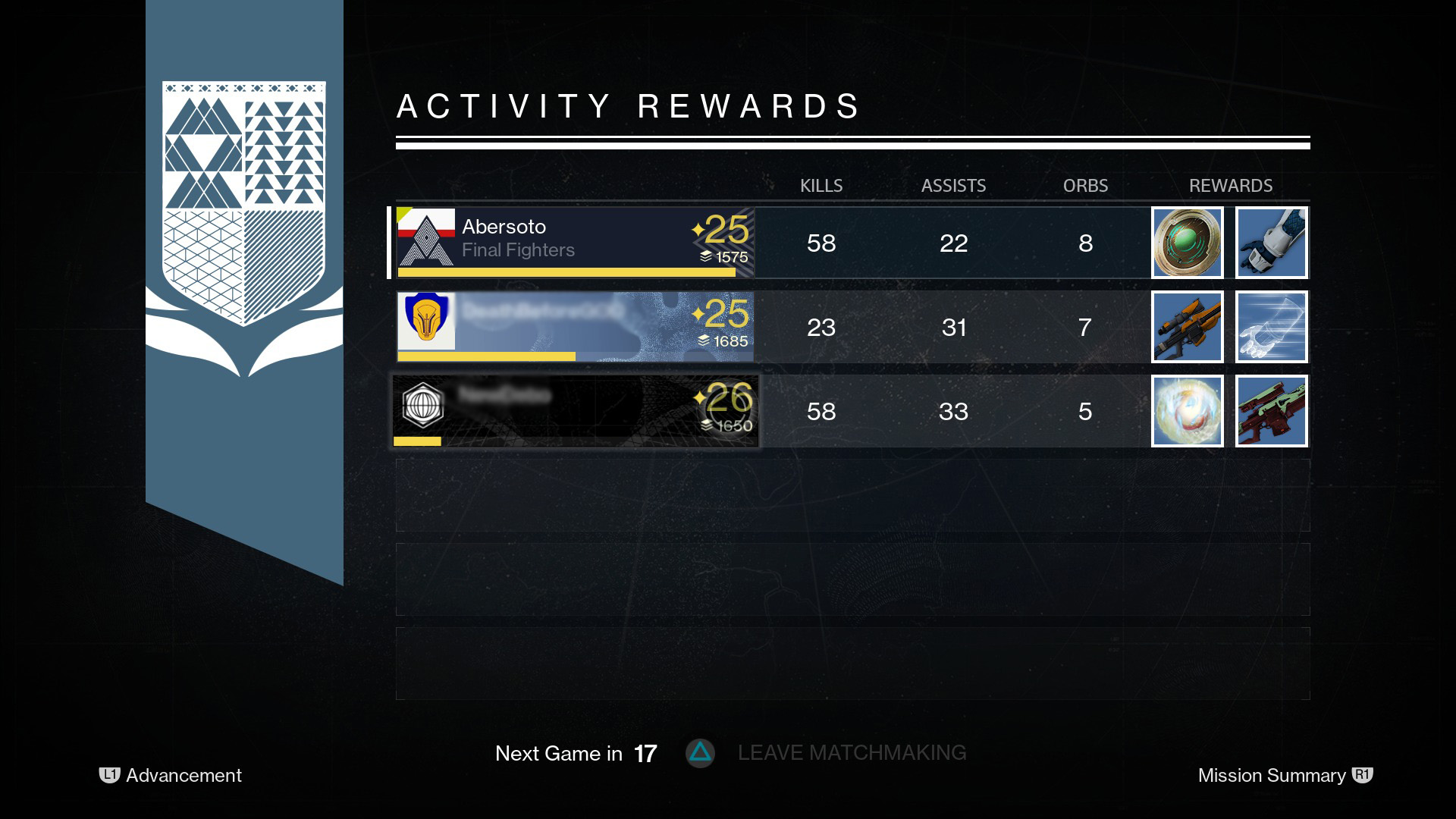 Random rewards from a random strike

By separating equipment gained from specific strike mission bosses Destiny is teaching the player, “Hey! It doesn’t matter what you do, just do it!”, preferably again and again and again.

This makes sense in the context of random strike playlists: play a random strike, the gear you receive isn’t impacted by the strike you actually play.

However, just like replaying story missions there isn’t any incentive to replay the same strike mission again because it doesn’t matter which strike the player completes. The equipment gained is always going to be random.

This is bad for game progression because instead of the game focusing on the quality of the strike mission (strategy for enemy encounters, actually have to decide which subclass will help the most, which weapons will help the most), the game focuses on the quantity of strike missions played. A player doesn’t need to have skill or put any thought into getting a better piece of equipment, the player only needs to have the time invested in random chance. Effectively, the game removes skill from progression. 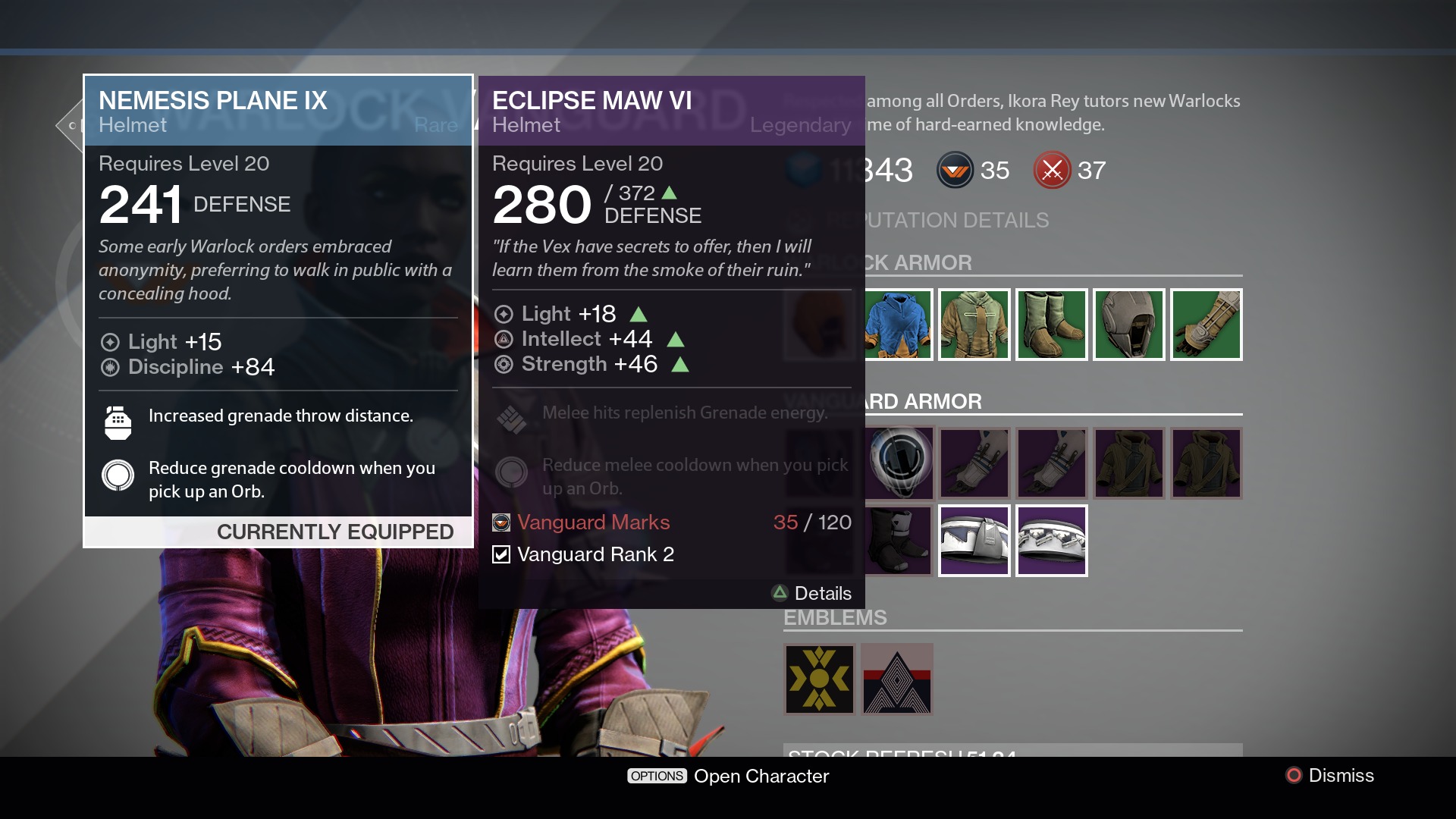 Just purchase better gear, no need to find it

To get an exotic piece of equipment (the pinnacle of equipment) a player only has to invest the time to gain the reputation needed or enough currency to purchase the item. These items should be rare and hard to find; only rewarded for completing some strategic task! Not playing the same strike missions time and time again to get enough ‘Strange Coins’. 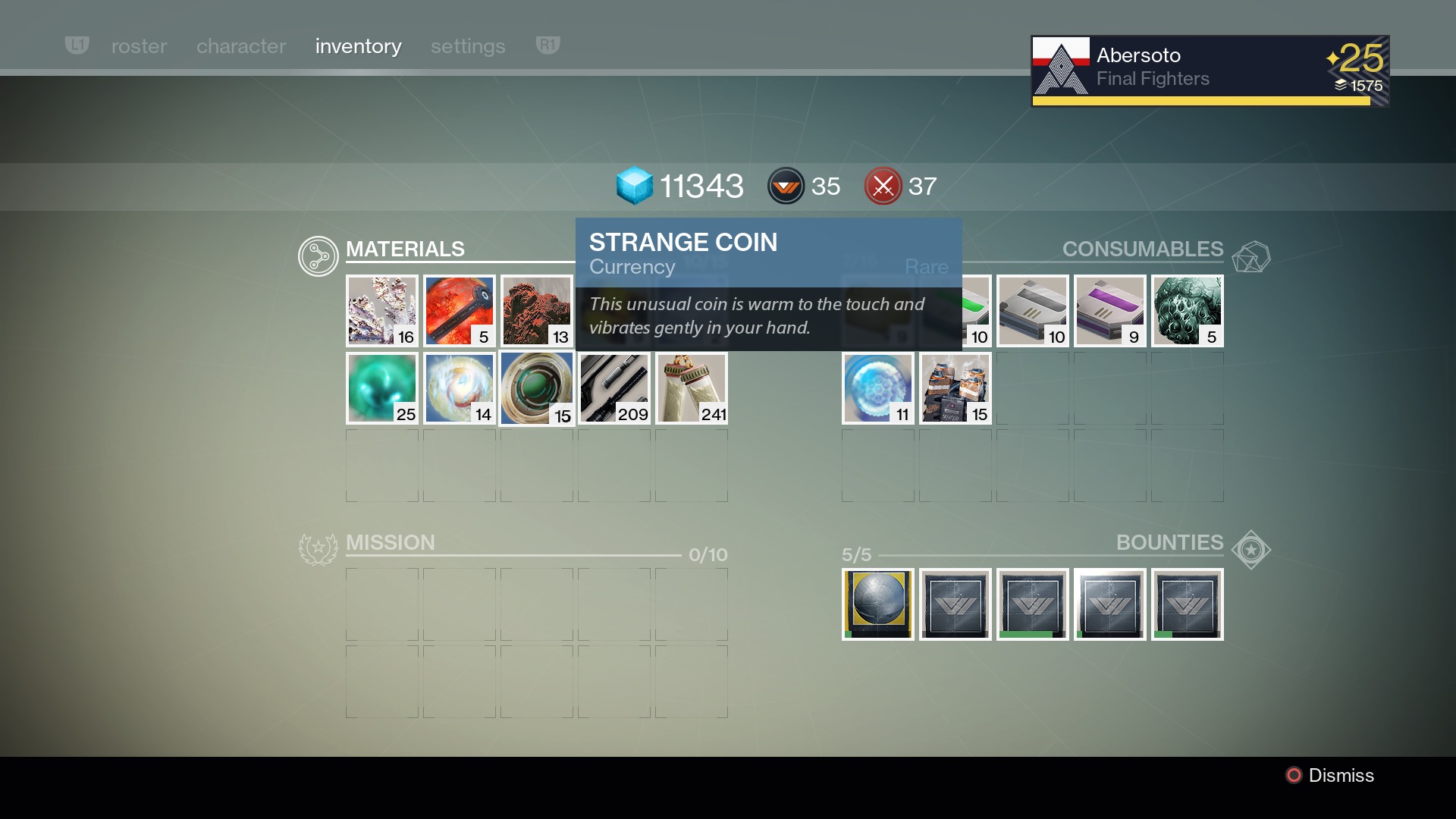 Only need 13 Strange Coins to purchase an exotic item

There is one last part of endgame content that no one has yet to play: a raid. 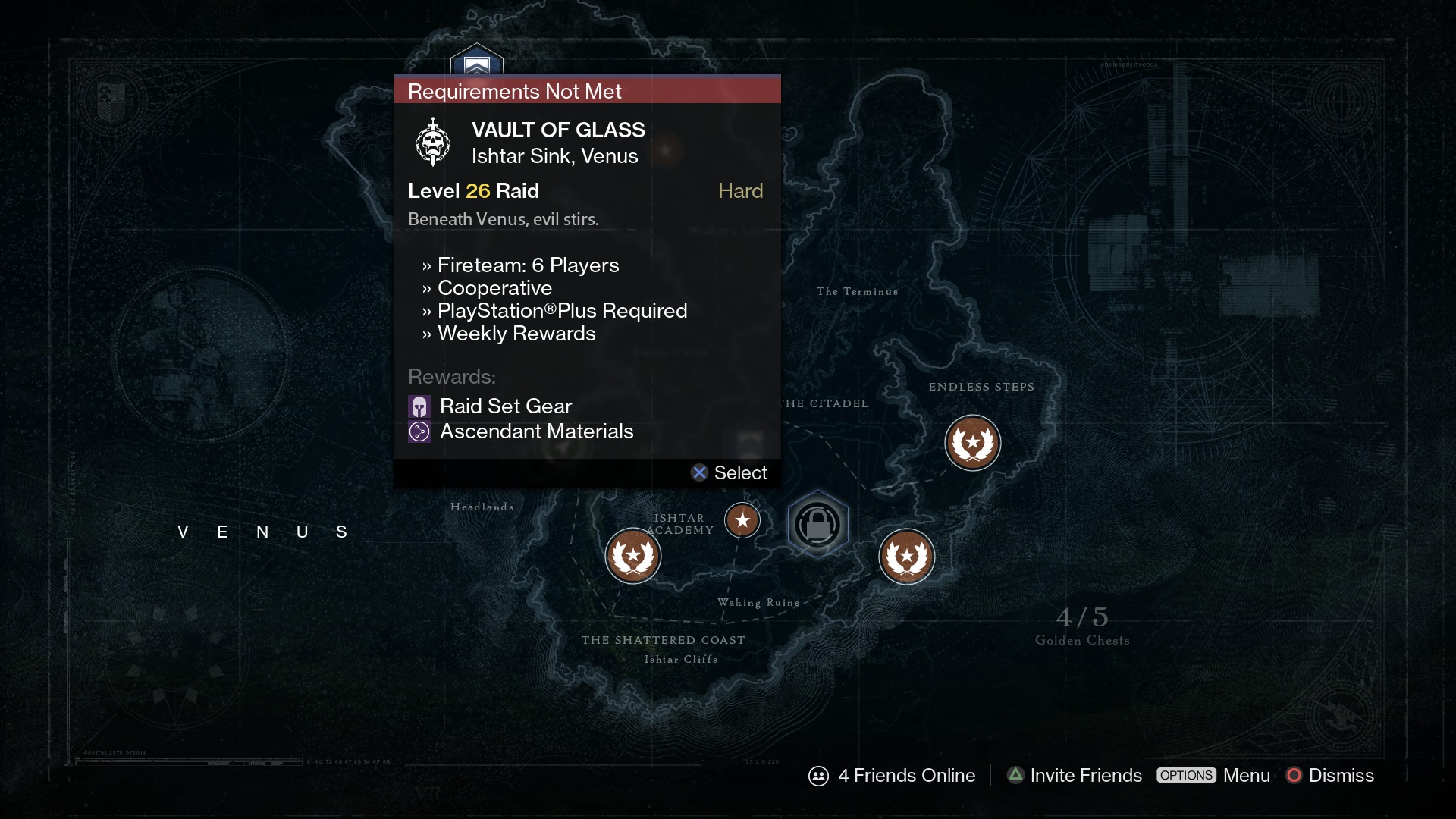 Promising a specific set of gear, upgrade materials for equipment, and a six player cooperative requirement, Raids looks like the classic cooperative massively multiplayer online roleplaying game dungeon offering specific rewards for completing bosses, but with ‘Weekly Rewards’ I can only imagine a random piece of upgrade material, currency, or experience point bonus.

I have hope that requiring six players means that the raid mission will have more tactics involved than shooting, hiding, shooting, hiding and provide a reason to keep coming back to each specific raid because a boss drops a certain piece of equipment.

Only time will tell.

But there is still love

Destiny is both wonderful and horrible. It excites me when I am actaully able to get a new piece of equipment; to get stronger. I really like the interface and the drop-in/drop-out functionality of a team. I love playing with all of my friends; jumping into a voice chat party and talking about random stuff while playing a mission together. Lots of elements of the game feel good like punching enemies in the face or hearing and feeling the impact of a shot on an enemy. Exhilarating!

However when the endgame content removes the thrill of defeating a boss and getting a better piece of equipment specifically from that boss and instead opts for randomizing equipment rewards, Destiny becomes a time management game instead of a team based skill or strategy game; how can I maximize the sheer number of strike missions I can play in a given amount of time?

I know I’ll keep playing the game despite the hangups I have on endgame content because Destiny is an ever evolving game with new content being released monthly (plus all of my friends are playing the game too). Hopefully raids will be the strategic team-based experience Destiny needs to stay exciting and for me to stay interested. 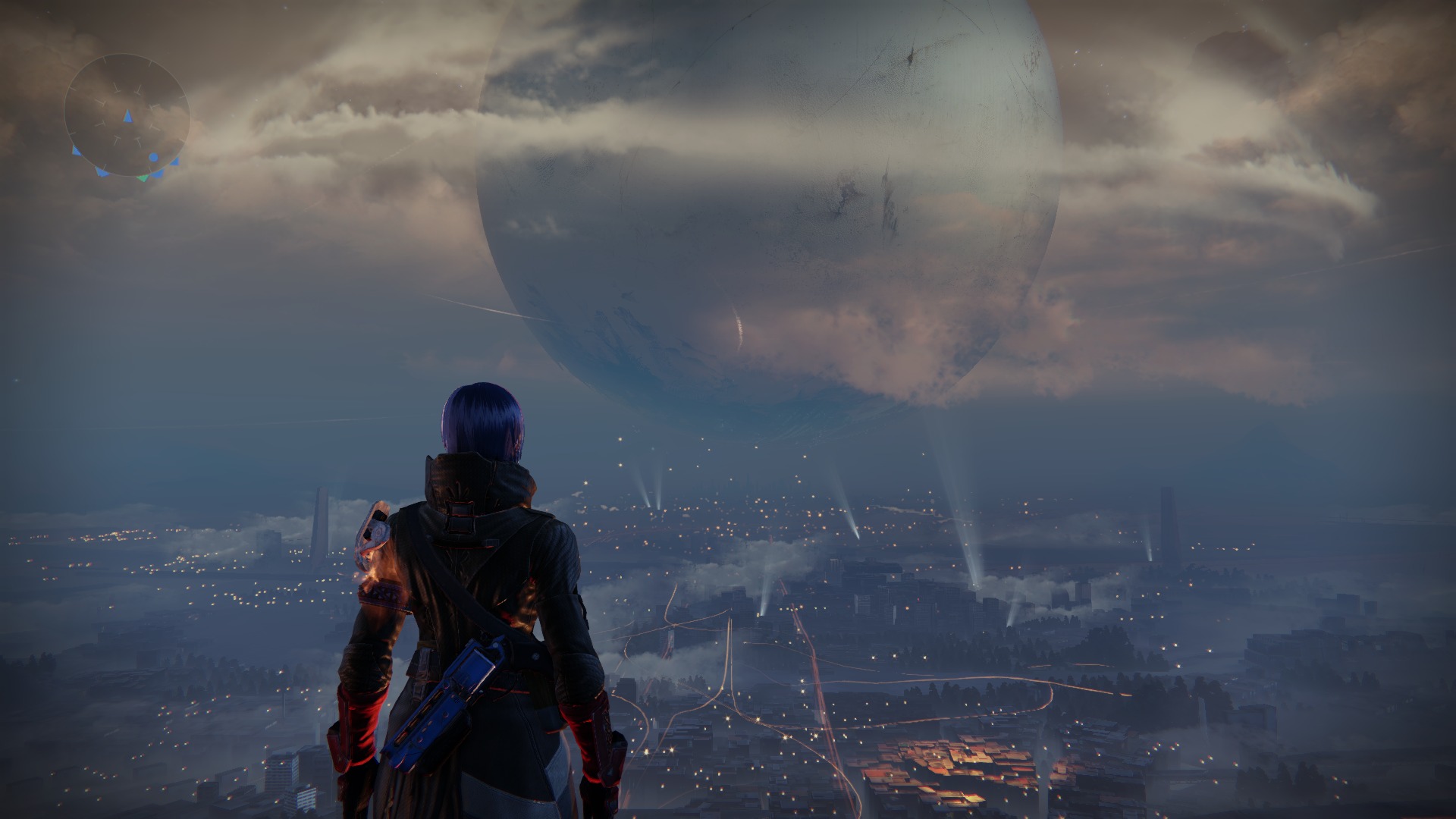